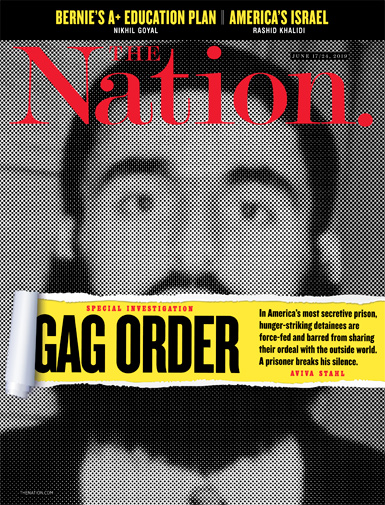 Gag Order by Aviva Stahl: The cover story of this issue is about the force-feeding of hunger striking prisoners in America’s ‘most secretive prisons.’ One of the things we must remember in a free society is the way in which we treat our worst, most despicable criminals reflects on us. The men profiled in this story are convicted terrorists, some of whom were responsible for the 1990 World Trade Center bombings. These men have been locked away in high-security prisons, isolated from others for long stretches of time under special administrative measures, or SAMs. These SAMs mean that they’re limited who they can meet with, letters to family may take six months to be reviewed and delivered, and they’re confined to the cell for 23 hours a day.

The justification for these SAMs are not disclosed to the prisoners, or their lawyers, and there is no appeals process for getting them reviewed. For these reasons many of the men under these restrictions go on hunger strikes. And many of them have been subjected to forced feedings, some as many as 200 times. And the details of these tube feedings sound abusive, if not borderline torture.

Unfortunately for these men, their plight is hidden from sight. Access to them is severely restricted, and many of these stories can only be told because the men in question have been released to lower security facilities. The author notes that when the world became aware of similar abuses taking place at Guantanamo Bay, the public outrage eventually led to reforms. Not so with these men, but perhaps this feature will change that. I remain skeptical, that given all of the issues with criminal justice going on in America at this time that we will see much happen with this under the current administration. It remains to be seen whether there recourse in the courts of justice, as I do not see the court of public opinion swaying on this one any time soon.

Renters Revolt by Jimmy Tobias: As we mentioned in yesterday’s review of the Home Improvement issue of Jacobin, housing justice has been growing in importance on the Left recently, and this report details progress in organizing renters. The author list three reasons that rent has become unaffordable for so many in America: lack of wage growth; demand for rental housing following the 2008 crash, which has led to a 50-year low in home ownership; and a Wall Street buying spree which has focused on buying apartment complexes and mobile home parks from family-owned business. From there, a number of tactics are deployed, either to force renters out so that new tenants can be brought in under a higher rent, or in the case of mobile homes, which are anything but, the tenants must either abandon their property or pay the higher rent. This latter situation was detailed by Last Week Tonight:

As was detailed in the Jacobin issue, New York City remains the focus of renter organizing efforts. As New Yorks rent-controlled housing stock dwindles, the upward rent pressure increases. But the rest of New York State appears to be without these rent protections at all, and thankfully there are signs that newly elected state legislators are taking a pro-renter position in order to correct these ills. Similar progress seems to be taking place in California and in the Pacific Northwest.

Efforts to organize renters, and their willingness to fight back against slumlords and exploitative landlords should be applauded, and we look forward to seeing more of how these efforts progress.

Manifest Destinies, by Rashid Khalidi: Review of Our American Israel by Amy Kaplan. Given all of the media time that US/Israeli relations have been getting lately, it seems appropriate that one examines the history of those relations. How did the Israel and Palestinian conflict, and criticism of the Israeli state, become such a hotbed issue in American politics. When I brought the issue up with my father, a red-blooded, gun-owning (former) Trump voter, his response was wrapped in acknowledgement of the Holocaust. Like the Germans, it’s seemingly argued, the Palestinians pose an existential threat to the Jewish people. Hostilities against them are therefore justified. Similarly, so was the 1982 war with Lebanon, which was before my adulthood, and likewise seems to be either forgotten or forgiven by most of the American public.

The Zionist evangelical movement in the United States gets mentioned as well. [I know we are playing with some dangerous terms here, boys and girls, but nothing we’ve written here should be taken in any way to be anti-Semitic.] I’ve always understood it from the aspect that the state of Israel is some sort of prerequisite for the return of Jesus and the Rapture. Still, the willingness of the religious right to put up with so much horror to fuel this dream still boggles the mind. I should not be shocked, I suppose.

This past week we’ve seen Congresswomen Rashida Tlaib and Ilhan Omar barred from entering Israel on a recent trip, as President Trump continues to his mission from God to protect the state of Israel. Need we remind the reader that during Obama’s last term, Bibi Netanyahu was invited to address a joint session of Congress. As support builds on the Left for the boycott, divestment and sanctions movement against Israel in solidarity with the Palestinian people, and as the centrists, liberals and the right backlash against these efforts, it’s important for people to realize how we got here.

Whether the presentation of Israel as the America of the Middle East is accurate, knowing how this relationship has been managed over the the past eighty years will help us deal with the issues in the Middle East. Not just with regard to the West Bank, but with Iran as well.