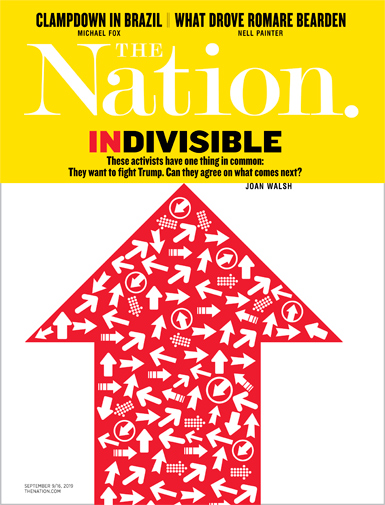 Yea, I know, we’ve got a stack of magazines from last fall that we’ve been procrastinating on, and they keep getting bigger and bigger. It’s obviously too much to keep up with. Nation’s publishing schedule is pretty prolific, and their subject matter is quite a step from Time Magazine. Couple of interesting articles in this one:

INDIVISIBLE, by Joan Walsh: Covers the post-Trump activist org of the same name, and schisms between their national leadership and grassroots organizers. This seems to be a recurring theme with liberal organizations; I wonder if Conservatives have the same problems?

Indivisible’s work has earned it enormous political capital; now its national leaders want to figure out how to use it. But since so much of that capital has been earned at the local level, the leadership has to be careful about spending it—and whether it is theirs to spend at all.

I’ve got nothing but respect for the work that Indivisible has done; the local chapter here has done political work for my causes in the past, and they’re a great group of committed activists. The issue here seems to be with how the national leadership wants to leverage Indivisible’s political capital as part of a 2020 presidential endorsement process. The issue with some of the larger cohorts is that an endorsement will likely alienate some members.

Interestingly, after this issue was released, Indivisible released their 2020 Candidate Scorecard. Warren and Bernie take the top two spots, with Biden dead last in the rankings. Apparently Biden declined to participate, so their ranking is based on ‘research into his public record.’ Oops.

To Stay Or Go, by Mara Kardas-Nelson: Environmental racism is the focus here, as the author details the battles that communities in Cancer Alley go through against their own elected officials and the corporation who are poisoning the water and air with the highest concentration of petrochemical plants in the United States. Of course, the prevalence of increased Cancer and other sickness in this region has lead to a flight of citizens out of the area, leaving most of rest with few options. As the population has fled, those remaining have fewer options to sell homes, and communities see their young people and entrepreneurs dwindle.

Of course people shouldn’t have to flee the homes that they’ve made, but it seems that people of places like St. James Parish seem to be fighting a losing battles. While there are some activists trying to fight back via court challenges and electoral battles, the current situation for these communities is quite dire. It’s a situation that we’ve seen play out in other places around the world.

Our Shared Fate, by Suzy Hansen: Review of What You Have Heard Is True, by Carolyn Forche: You may remember this exchange between Ilhan Omar and the Trump administration’s special envoy to Venezuela, where she pressed him over his involvement in the Iran-Contra Affair and in El Salvador’s civil war.

The massacre that isn’t mentioned by name in the above clip is the 1981 El Mozote massacre, an event during the El Savador civil war in which a village of 800 men, women and children were raped and murdered by a US-backed Salvadoran army battalion.

What You Have Heard is True is the memoir of American poet Carolyn Forche, who spent several years in El Salvador during this period. It is one that more Americans need to be aware of, given our complicity in the events there. It puts a different perspective on the immigrants who are fleeing from there to this day, trying to enter the United States and being caught up in family separation.