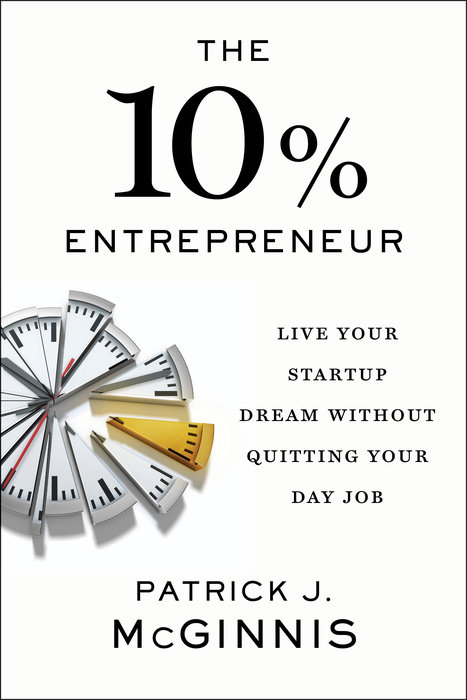 Live Your Startup Dream Without Quitting Your Day Job, by Patrick J. McGinnnis

My wife got me this book for Christmas last year, and it’s just the book I need at this point in my life. Like most people, I’ve been fed up and unchallenged by my day job for some time, and looking for a way to escape. I’ve been unwilling, or unable, perhaps, to take the plunge into entrepreneurship at this point. I’m in my early forties, and have a mortgage and two kids to take care of. I’m not financially independent, yet, and so quitting my day job to work on some venture right now is not something I’m willing to risk.

When I was in my mid-twenties, I fell into business ownership. I worked at a small computer sales and repair store, and the the owner wanted out. This was during the beginning of the Iraq war, and the owner was in the reserves and going to be called up. They offered the store, and all assets to me and another employee if we were willing to take on the business debt. We both jumped at the chance, but the venture ultimately failed, and it took me seven years to clear the stains on my credit. So needless to say, going into debt to start another business is not something that I’m willing to do.

I’ve also seen how taking on personal liability for a business loan has affected my current boss. Having that kind of stress in ones life is a sure-fire way to grey hair and cardiovascular problems. Unfortunately, I don’t have access to the type of venture investors who are willing to throw angel money at a company, at least not yet. I did have an interesting experience participating in the semifinal round of a local startup competition that was fun, but ultimately, when the it seemed that the chance to go all-in on a venture was presented, my existing obligations, political and personal, prevented me from taking that leap.

They say that the thing that you want is on the other side of your fear, but so far my need for stability has won out. Perhaps that’s why McGinnnis’s book is so appealing. It offers a third way between the two poles, between day job stability and entrepreneurial rewards. It advocates keeping the day job and turning ten percent of ones resources, whether that be time, money, or expertise, toward startup ventures.

The 10% Entrepreneur is a light book. It’s opening pages have a few checklists and self-assessments to find out where you stand, it moves on to concrete steps on how to build your opportunity pipeline, assess them, and build a team or personal network. It’s filled with numerous real-life examples, including the author’s own, of people who have followed the 10% plan to build their own businesses and ultimately, a new life.

McGinnis describes the various ways that people can contribute to their ten percent, based on the resources they have at hand. Those with time can focus on running a business, those with expertise can advise, and those with capital can invest. And those with more than one of those can blend them accordingly.

One insight I took away from the book is the idea of a cornerstone client. A term taken from commercial real estate, a cornerstone client is usually a large retail store, like a Sears or Macy’s that draws customers and attracts other stores to a mall or shopping center. The metaphor may not hold up in this post-retail age, but McGinnis recommends focusing on finding that cornerstone client for your venture, one that will show that you’ve arrived, and provide social proof for other perspective clients. This type of proof of work, or past performance as it’s called in the government contracting business, is important to establish oneself, and provide the necessary traction to make a transition from ten percent into a more involved role.

Some of the ten percenters described in this book decide not to quit their day jobs, instead preferring to hand off day to day management to others while retaining ownership. Others build a stable of advisorships, building equity in a number of firms. I’m more partial to the latter. Just a few days ago, I called up a contact that I’ve been advising with to tell her that I was ready to take a formal stake in the company in exchange for two hours a week of advising. We have been dancing around this relationship for over year now, but with graduation on the horizon, it’s time for me to take the next step.

I have another venture I’m involved with, that has been my cornerstone client. I had neither realized nor been treating them as such. But as I was reading the book it became instantly apparent. It’s not a relationship that I’ve been too happy with, so I’m in the process of re-evaluating that relationship, and reaching to both them and another potential partner that I’m hoping will make a much more solid cornerstone.

Building your ten percent venture, just like any business, is about building a network, forging relationships, and making connections. It may sound a bit cliched, but it is like planting seeds and watering them from time to time until they sprout and grow. I haven’t been the best at keeping up with people, personally or professionally; a shortcoming that I will no doubt have to correct. The 10% Entrepreneur reminds me that this cannot be neglected.

And ultimately, being an entrepreneur, whether that’s a ten percent or full time job, is about playing the long game. McGinnis discusses failure and the importance of ethics when it comes to ones reputation, and how important open communication and treating people with respect is. It’s possible to fail and still come out on top. If you handle the fallout with integrity, it’s likely that others will want to work with on that next entrepreneurial project, and maybe this one will be the one to take off, providing you the freedom or fulfillment that you so desire.

So the search has officially begun. I spent some time on AngelList, looking for opportunities, and sent a few messages out some founders. All equity stakes, unfortunately, but hopefully I’ll start the conversation rolling.

Also reached out to the team behind a new AI startup. It seems that they’re running various AI projects behind the scenes and offering an API for devs to get the results. Seems like an interesting platform play, providing AI as a service. Reminds me of what Twilio did.

Following the advice of Peter McCormick in The 10% Entrepreneur, I’ve started writing a professional biography. I uploaded my draft to AngelList, and will do so on LinkedIn as well. I have to be careful how I put things, cause I don’t want any blow-back from my boss right now. I don’t think it’s likely, given that they can’t survive without me, but I can’t afford to take chances. Anyways, the point of the biography is to build a coherent picture that brings together where I’m at now, where I hope to be, and encompasses my professional, academic, open source, and political contributions. I think I did a good job.

Today I will focus on making progress on client projects, and following up on any opportunities. One of my clients hasn’t paid in months, so it’s time to have a tough talk with them about the future. I have another advisory project I haven’t spoken to recently, and another relationship that I’m hoping to make the cornerstone of new business.

After assessing that, I need to make a few cuts, finance wise. I’ve been carrying Basecamp, Harvest, and an Adobe Creative Cloud subscription for some time, not to mention my Namecheap reseller account and AWS instance running the IDEX node. Unless I can secure some immediate funding source, I’ll have to cut. I think Basecamp may be willing to offer services for people affected by Coronavirus, but I doubt Adobe would do the same.

On a personal node, I should probably do the same with my Waking Up subscription. Sam Harris is gracious enough to allow people to request free subscriptions, so I need to do that. Taxes are also due in a month, so I need to start working on that. I’ll defer that till this weekend. I manged to eek out a refund last year because of business expenses, but I’m not sure I’ll be able to get away with that this year. We’ll see.

That’s it, time to get busy!