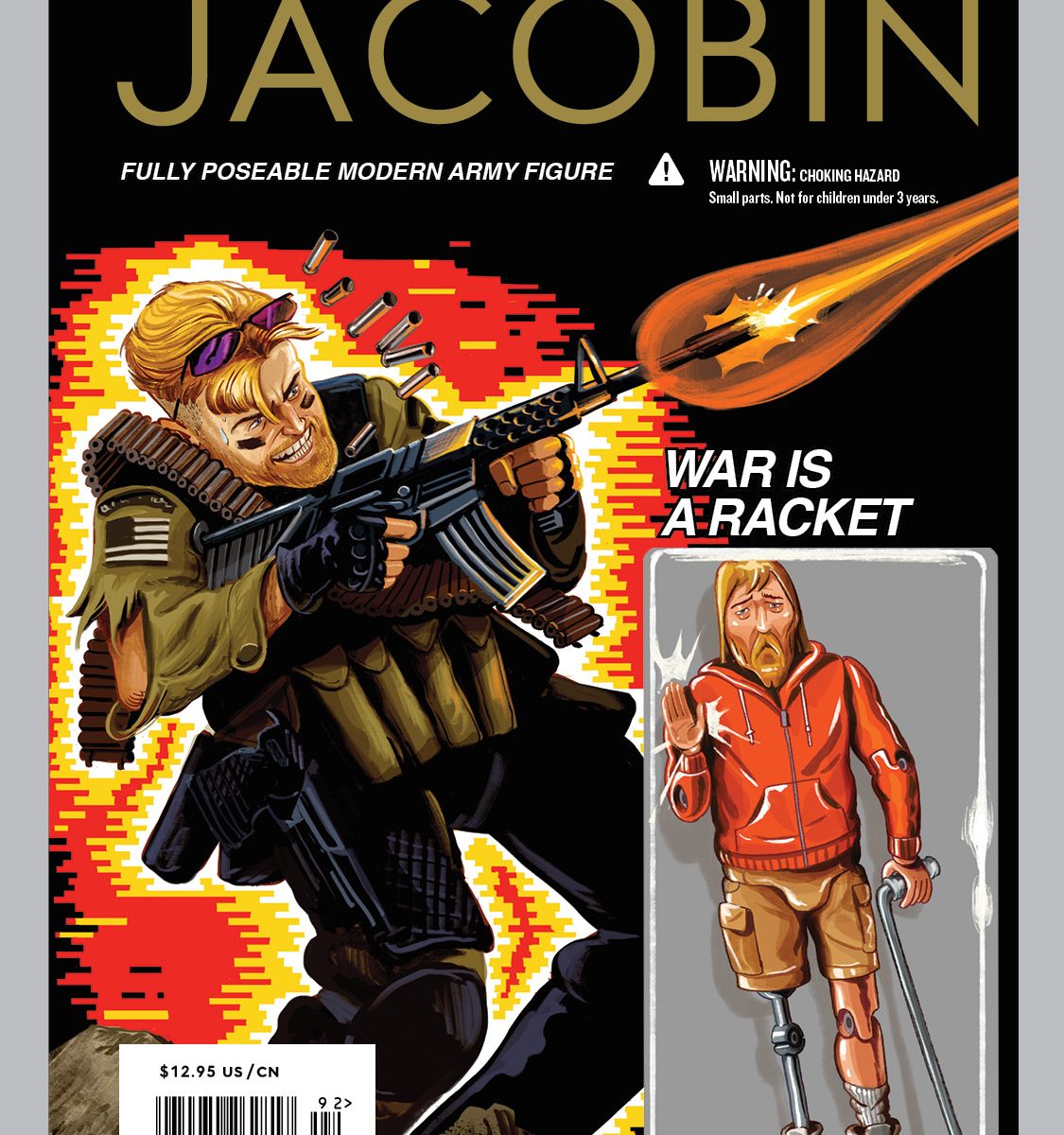 It seems wholly appropriate to be covering this issue on Veteran’s Day. Both my parents were Army, and I’ve been living in an area of the country with one of the largest populations of active-duty personnel in the country.

This issue came to my door looking like a mock up of an old GI-Joe action toy, the packaging made out with images of our hero in the midst of battle. In this case, however, the included figurine is long after the battle has ended. Our action hero is sporting non-regulation long hair and beard, as well as a prosthetic leg, cane, and several bottles of prescription medications litter his feet.

This issue pulls no punches, deflating the notion of ‘service’ and ‘supporting our troops’. There’s plenty in this hefty issue about ending American imperialism, but probably the standout for me is the re-framing of American military culture as a ‘poverty draft’:

“The military welfare state only makes an effective recruiting tool because the Unite States denies all of us the civilian safety net we deserve. The US working class is held hostage by a political and military elite that exploits our deprivation to fuel its endless wars, forcing workers to make a devil’s bargain in pursuit of basic protections that should be available for all.

This statement hit me with such a moment of realization that reading it, I was almost embarassed that I had not seen it before. It’s a bit difficult to state the way which military culture permeates the culture here, so it was a bit like the David Foster Wallace bit about a fish learning what water is for the first time.

There’s a bit about activist opposition to ROTC programs in High Schools that made me think about the recruiting emails and texts that I’ve been getting through my college email address. And there’s a lot more in this issue, which is heftier than most of the others I’ve seen from Jacobin. They have a breakdown of the current 2020 Democratic Presidential contenders, (dl;dr: Biden, F; Warren, D-; Bernie: A-), infographic timelines on US military installations post-WWII, and some other features that are interesting.

But the short end of it is that they’re right about the hold that US militarism has on culture. From ‘Defense’ spending, displays of patriotism at sporting events, to the exploitation of Veterans by for-profit colleges via the GI Bill, American’s have an unhealthy relationship with our Armed Forces. And while a good deal of this issue does talk about concrete steps that can be taken to turn the tide, it seems like it might take generations before we have a population willing to fight back against our military-industrial system. Providing Medicare for All and free college would do a lot to break this, but then again, this may be exactly why the powers-that-be are fighting so hard to stop it.