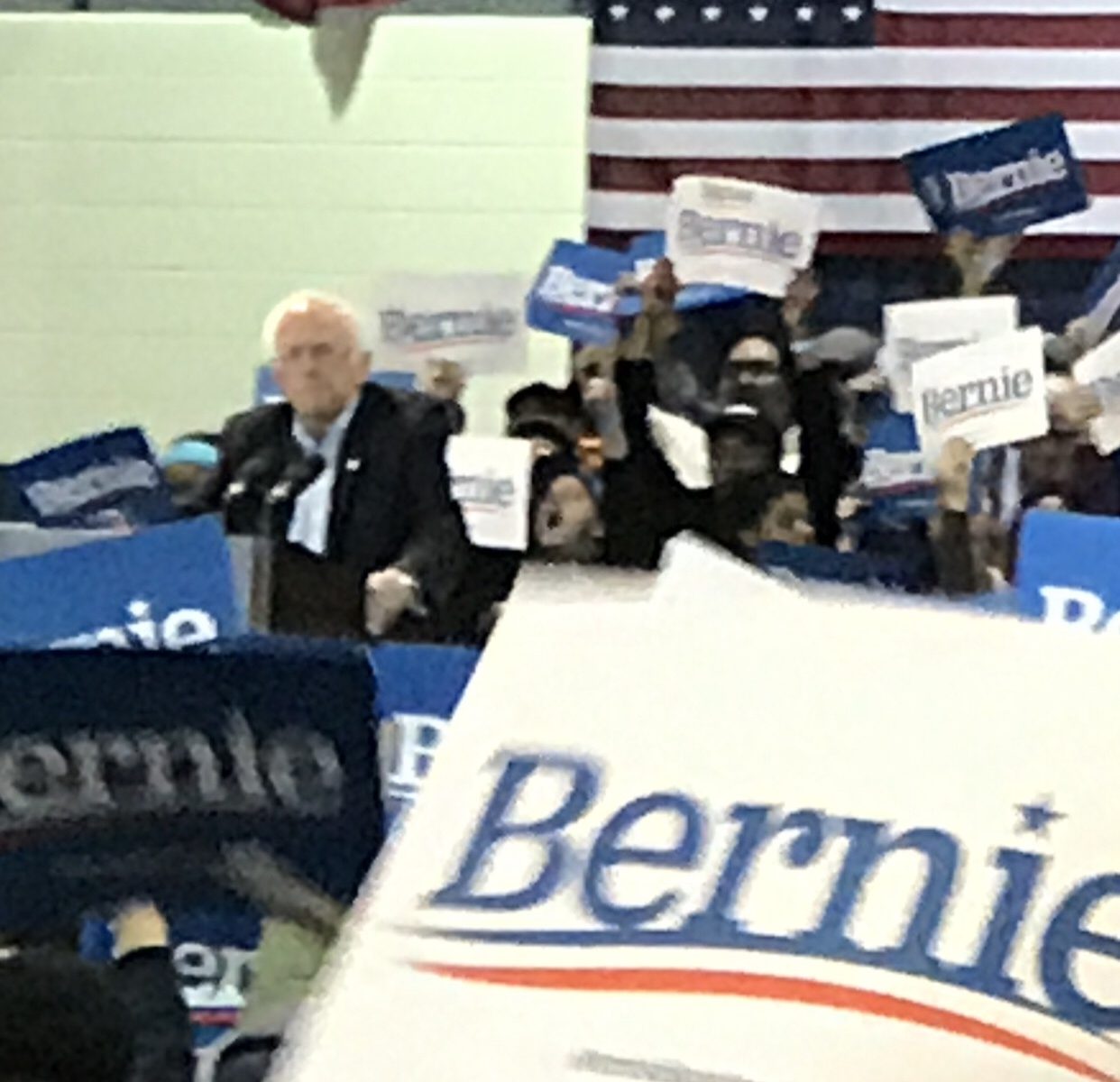 Bernie Sanders came to town yesterday. As our state is a Super Tuesday one, he held three rallies across it. I was part of the 2016 team and had a great experience when he came by last time, and wanted to help out this time around, so I signed up for a volunteer. My wife got us an overnight babysitter, and we headed out to the event to help with the show.

I was shocked at the sheer number of people who were there to volunteer. I had expected maybe a dozen people, but it was closer to 50. The staff rattled off jobs and picked from those with their hands up, but we were in no hurry to sign up for anything. The temperature had dropped into the forties with a brisk wind, an I had underdressed, with only a sport coat, so there was no way I was working outside. After a second round of walking us around I finally raised my hand to work the overflow room.

In 2016, they had held the rally at a local sports area, and had 3000-3500 at the event, mostly all on the floor. This year’s event was held at the stadium of a local university, that seemed like it had less capacity. I was told that it had room for three thousand on the floor, and staff said they weren’t expecting to need the overflow room. They were wrong.

Volunteering at an event like this is almost like having a backstage pass at a rock concert. And dressing up like I did gave me an air of authority as well. (Being an clean cut white guy helps also…) We were told that “the Senator” would address people in the overflow room, and I figured it would be easier to get close to Bernie in the smaller room than pushing through the crowd in the main room. They had a podium setup, and a projector connected to a laptop. I wanted to make myself useful, so I tried to make sure that we would have access to a live stream in the room. The first problem is that I couldn’t find one. I communicated it to staff, and was told that “someone was going to handle it.”

The overflow room was a secondary gym, just two full size basketball courts, with a capacity of a thousand. They main room began to fill and we were called too our stations; our job was simply to count people coming in to the room. They started sending people our way and that’s when the nature of the job became clear: people were disappointed.

Getting to the event for us had been somewhat of a chore. We go there almost three hours before the start time, and there was already a line of cars to get on the university campus. I checked my map and found a lot that was in the opposite direction of the road to the building we were supposed to go to, and was able to cut ahead so we could park and walk the short distance to where we were supposed to be. We had to walk to the far side of the building, and I was fighting off the chill the for about five minutes. People who were waiting for the event, regular attendees, were outside for an hour or more.

So imagine, you’ve been stuck in traffic, waiting in line for an hour or more, freezing your ass off at 6:30 in the evening, you finally get into the rally to see your favorite presidential candidate, expecting to be among the thousands of like-minded folks, and instead, are stuck in a gymnasium with a few hundred. It must have felt like going to see your favorite arena rock band and getting the local dive bar cover band instead. People were let down.

We had been told that Sanders would speak before the overflow crowd, which seemed to temper some people, but others were straight up indignant. Several men acted like the whole thing was beneath them. Another, and older woman, caught me in the hallway, crying about the situation, asking me why they weren’t told to show up sooner, and that she was unable to stand for long, and it was cold, and so on. All I could do was listen and offer her a chair, but there was nothing I could say to make it okay for her. Looking back, I suppose I could have tried to let her through into the capacity room, but frankly, I was kind of indifferent that she hadn’t anticipated there being a huge crowd at a Sanders rally.

We had told people in the overflow that Sanders would stop in the room, but as the event started we were told that it was starting to look unlikely due to the Senator’s flight plans. By this point, the bands had finished and the warm up speakers had started, and there wasn’t a feed in the main room. Someone had put a livestream up, but the only sound was on the projector cart, which had a pair of desktop computer speakers on it. There was a PA in the room, but the board for it was on the opposite side of the room. People were getting very antsy. I was apparent that whoever’s job it had been to manage the overflow room had failed completely, and I had already brought my concerns to staff several times.

So, I did the only thing I could think of and grabbed the microphone for the room, turned it on, and held it up to the desktop speakers. It sounded like shit, but between that and the close captions on the video feed, people could actually hear the speeches. So I stood there for close to half an hour holding this mic, watching the livestream of the event going on the other side of the room, with 500 or so people who had been relegated to overflow hell.

Eventually, the word from staff on the chances of Sanders coming through the room was not likely, so I handed the mic off to someone else and made my way in to the main room. I found my wife in the back. Caught the last few minutes of the Senator’s speech. He seemed tired. When he was done, I tried to bring my wife back to overflow in case he actually came through, but she wanted to leave. So off we went.

I don’t know if he made it to the overflow room.