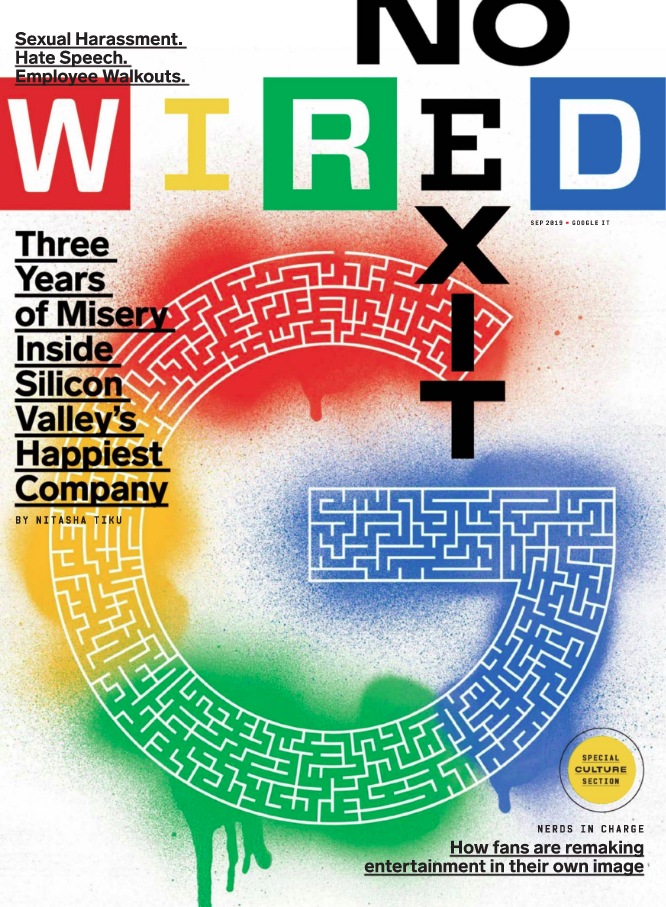 Three Years of Misery Inside Silicon Valley’s Happiest Company, by Nitasha Tiku:The cover story of this month’s issue a really in-depth piece about the chaos that has been plaguing of the eponymous internet search company, Google. One of the things I love about Wired is their long form reporting, and this article is several thousand words, about 14 pages of text in nine parts. Tiku details the leaks from inside the company that seemingly destroyed the company’s unspoken rule of ‘what happens at Google, stays in Google’. Social justice activists tore down the company’s missteps with regard to sexual harrassment by managers and execs, betraying their “don’t do evil” motto, through dealings with authoritarian China and the United States military.

The article really opens up a look at the inner culture of Google, how they had a fairly open culture, with C-level executives making themselves open for questioning from staffers, and with rank-and-file employees creating sub-cultures within the company. T

The story starts in January 2017, as employees took to the streets after the Trump administration’s travel ban was declared. The company stood behind their employees and stood up for immigrant rights. Then in June, an engineer named James Damore release a 10-page memo ‘explaining’ why there weren’t more female engineers in the industry. Damore was reacting to efforts to promote female engineers within the company, and claimed that this was a bad idea since there were biological reasons why there aren’t more women in STEM fields.

The eventual backlash to Damore’s memo, and his eventual dismissal, started a culture war between the company’s conservatives. Apparently, this minority within Google had been existing within their own corner of the company, but following this, some of them became emboldened and began to step up their opposition and trollishness. They doxed several of the liberal organizers, thereby breaking the company’s sacred rule of non-disclosure.

This episode is just one of several that Tiku details. By the end of the piece, it’s clear that Google’s culture has been transformed, and that while their employees may still be sticking to their ‘don’t be evil’ motto, the executives of the company, driven by shareholder capitalist growth demands, have lost their way.

FAN-tastic Planet: When I was a teenager, growing up in the mid 90’s, Wired was the coolest magazine on the planet. I felt that it offered up both a vision of the future and secret knowledge about where things were headed. Wired was an essential fuel for the ideas that eventually led to my career in computers and programming. Now, having learned more about the nascent cyberpunk culture that Wired killed off in favor off Dot Com boom and bust, that I wonder more about what could have been. I bring this up because I was almost shocked to read the intro to this special culture section in this issue.

“A person sitting at a computer – it was a mystical sight. Once,” it opens, before going further into something straight out of a Rushkoff monologue: “The users, we humans were the almight creator-gods of the dawning digial age, and the computers did our bidding. We were in charge. In today’s world, subject and object have switched places… Computers run the show now, and we -mere data subjects.” It’s almost like they literally took Rushkoff’s point about ‘figure and ground’ verbatim. Please forgive me, dear reader, for mistaking if his point isn’t original. But given his disdain for Wired’s entire raison d’etre during the 90’s and aughts, I find it entirely ironic that they have this section: fan-fic-writing nerds; Netflix’s turn toward Choose-Your-Own-Adventure-style programming; social-media influencers ‘connecting’ with fans over special, subscriber only feeds; and the rise of a new generation of crossword-puzzle writers who are bringing new, diverse voices to another field traditionally dominated by white men. (This last one actually includes a crossword, and let to several days of puzzling on my part.)

Free Riders, by Zeynep Tufekci: The front pages of this issue have the standard Wired fare, gadgets and the latest tech. This time it’s smart-writing tools and augmented-reality gizmos. A bit about the current NASA Mars rover being built, another extolling the joys of world-building video games, another bemoaning Facebook’s creepy dating feature. I wanted to end with a mention of Tufekci’s bit about the prevalence of commercial companies that are built on top of the free, open source tools that have been released to the internet. Not that this is a problem, per se, but there have been many instances of packages that have been so instrumental to the success of these companies, and to the industry in general, that have had security issues, or depended on the unpaid efforts of some very overworked contributors. Tufekci details two pertinent examples: the Heartbleed bug, which affected the OpenSSL spec used to protect almost all web traffic, and core-js, a Javascript library widely used in web browsers.

In the latter case, the developer had been working on the library almost every day for five years without pay, and had solicited less than a hundred dollars. While some might blame him for not taking advantage of his project’s popularity and using it to leverage himself into a high-paying gig somewhere, the issue highlights a problem with the web’s altruistic origins, that have long since been abused by corporation. At least, in the case of OpenSSL, they were able to guilt some firms into providing more funding, but we’ve got a long way to figure out a way to reward these open source programmers that have provided the tools that the web is built on.