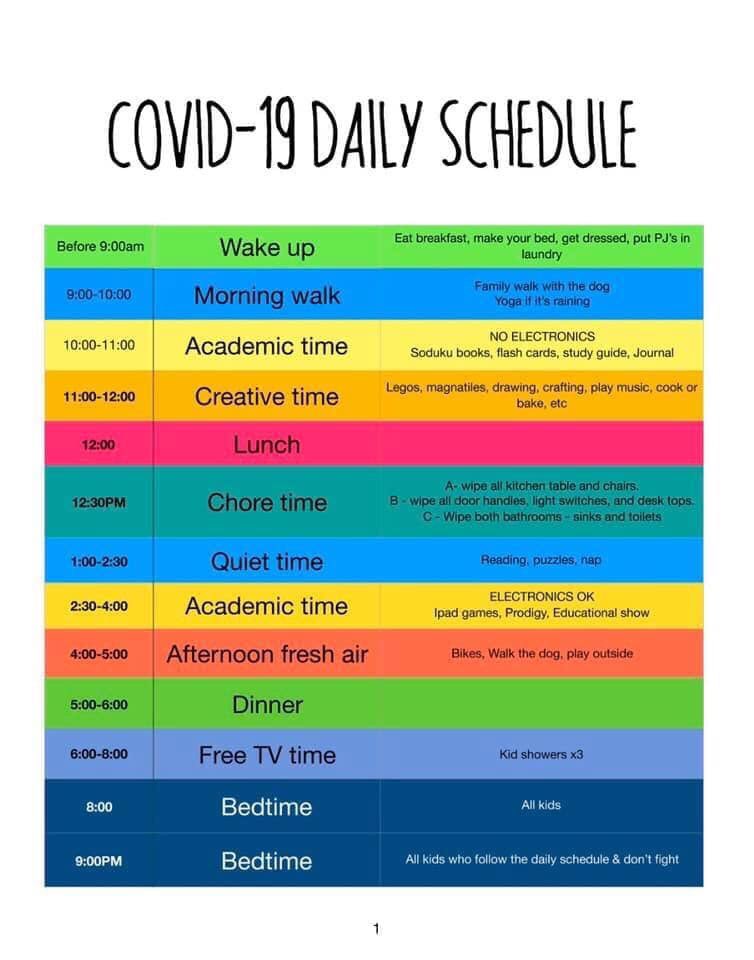 I assume, that, much like 911, life will come to be known as before COVID-19 and after COVID-19. Today is, different, and I’m trying to be as conscious as possible about how this new life plays out. The chart above is one my wife posted in response to a question from someone stuck home with two small children about activities they can do to keep from going crazy, and I’ve already started making a list in my head of things I want my children to do.

I had a conversation with my oldest last weekend where I tried to explain the importance of attention. There’s a quote I kept seeing in the Waking Up app: “There’s a multi-front war on our attention, and we’re losing.” It’s resonated with me. I thinking about it much lately, whenever I’m feeling guilty about spending too much time on Twitter, or when my youngest is trying to get my wife to pull her nose out of her phone. But what especially irks me is the way my children act with regard to the television.

My oldest does not exhibit much, let’s say, resiliency, when it comes to not getting her way. She’s very prone to defiance and tantrums, and entitlement. Lord, the entitlement. Especially around television. I’ve tried various tactics over the years, both the carrot and the stick. I’ve put it (the television) in “timeout” for one or two weeks, we’ve tried Friday to Saturday night Shabbats. Lately I’ve been allowing them thirty minutes right after they get home from school that they can have a show, with the understanding that they’ll do their chores without any fuss afterward. Even that is starting to lose it’s efficacy.

As part of our drive to FIRE (financial independence, retire early), we’ve cancelled all of our subscription services, Hulu, Prime, and Netflix was the last to go a few weeks ago. The library has an app with short films and movies, mostly non-Disney animated versions of fairy tales, that they’ve been enjoying, and I recently purchased a ProtonVPN subscription so I can torrent anything else that we really want to see without worrying about my ISP cutting off service.

We take them to the library weekly, usually leaving with twenty or more books. My girls are readers, that is for sure. My wife and I are voracious readers, and we’re both glad to have handed that habit down to them. And my oldest has finally found something that she likes better than watching TV: Roblox, which I would describe as a Minecraft-type game.

During our conversation last week I tried to explain to her the difference between active and passive activities, why TV was a passive one and doing things like Roblox and learning apps was was not. It was a Saturday morning, and she had already spent more than half the time she’d been awake watching TV, and I tried to tell her that I wanted her to have some balance. I tried to sketch out a pie graph to show her what her waking hours looked like and what I thought a good balance between active and passive activities, screen times and chores, inside and outside play. I’m not sure how much I got through her head before she lost interest and started fidgeting, but I think some of it stuck.

So we’ll use the activities chart as a starting point, but make it a bit more dynamic. We’ll play with the timing and activities and see how things go for the kids. It’s also not a bad idea for me to put something together like that for my own time. I’m going to have to keep focused also.