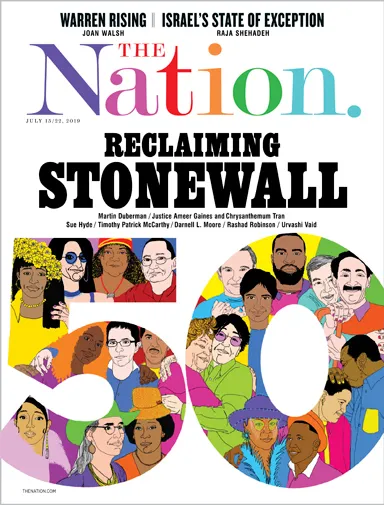 Reclaiming Stonewall, guest editor: Patrick McCarthy: This issue commemorates the 50th anniversary of Stonewall. I hate to use the word riot in the context of this event, a more appropriate term would be confrontation. Fed up with being targeted for by police for being, Stonewall marked a turning point in the LGBTQ community, one that would see a revolutionary change in status through the AIDS crisis and marriage equality. This special section of the magazine features short contributions by a number of LGBTQ activists, organizers and authors.

Warren Rising, by Joan Walsh: Continuing their coverage of the 2020 Democratic nominee hopefuls, The Nation turns their attention to Elizabeth Warren. Along with Bernie Sanders, Warren is one of the front-runners among the more radical and progressive factions on the left, and this gushing portrait of her is indicative of that. Joan Walsh follows Warren as she stumps through Iowa, covering her speech and reaction from the electorate while providing more of Warren’s background and some direct reporting.

I cant tell if this report is a glowing portrait of Warren because of her front-runner status in the primary, or if it’s because she’s the real deal. I’ve got great respect for Warren, and would welcome her as the nominee, but I would still prefer Sanders’s class-antagonism over Warren’s “I’m a capitalist” reformism. Still, there’s the issue of electability, and given Warren’s ability to bounce back from Trump’s attacks, and the Democratic establishment’s fear/hate of Sanders, I do hope that either one of them is able to beat out Biden for the nomination.

Resisting Trump’s Cruelty, by Sasha Abramsky: If there’s anything that seems to drive my outrage fatigue more than anything, it’s the Trump administrations’s wanton cruelty against immigrants. As I’m quick to remind, “it’s not a bug, it’s a feature” of Trump’s policies, following a predictable proto-fascist campaign to stir up racial resentment and white nationalism. This article points out the rays of sunshine in the fight against this dehumanization of South American refugees, those risking jailtime to make border crossings through the desert less deadly, and the churches and community organizations that are stepping up to sponsor, clothe and shelter those waiting on their asylum hearings.

Inherently Unequal, by David Cole: Review of Separate, by Steve Luxenberg. This history of the Plessy v. Ferguson case, the Supreme Court case which enshrined separate but equal in the United States until it was over turned 58 years later, is interesting for a variety of reasons. The litigants in the case knew that it was deemed to fail, and it was even opposed by Frederick Douglass and other civil rights supporters. Without a mass movement on their side, they knew that the nation, still reeling from the Civil War, was not ready. What surprised me also was that the case was brought by the Citizens’ Committee to Test the Constitutionality of the Separate Car Act, as well as the Louisville and Nashville Railroad, which did so because of the expense of operating separate cars. While the justification of the Court’s majority decision that segregation was “in the nature of things” is not surprising, it is that the sole dissenter in the 7-1 decision was the Court’s only southerner, Justice John Marshall Harlan. Harlan, who was raised in a slave-owning family and was a long-time opponent of civil rights legislation and supporter of states-rights, was nonetheless a supporter of the 13th and 14th amendments.

"Do not indulge in dreams of having what you have not, but reckon up the chief of the blessings you do possess, and then thankfully remember how you would crave for them if they were not yours." - Marcus Aurelius Happy #Thanksgiving to all my American friends 🎉🎊🎈

Would love to see this for ETH. twitter.com/mononautical/s…

DeepFakes, but for singing. I imagine similar techniques will be used to create any kind of spoken content. The future's going to be cray-Z. twitter.com/hollyherndon/s…