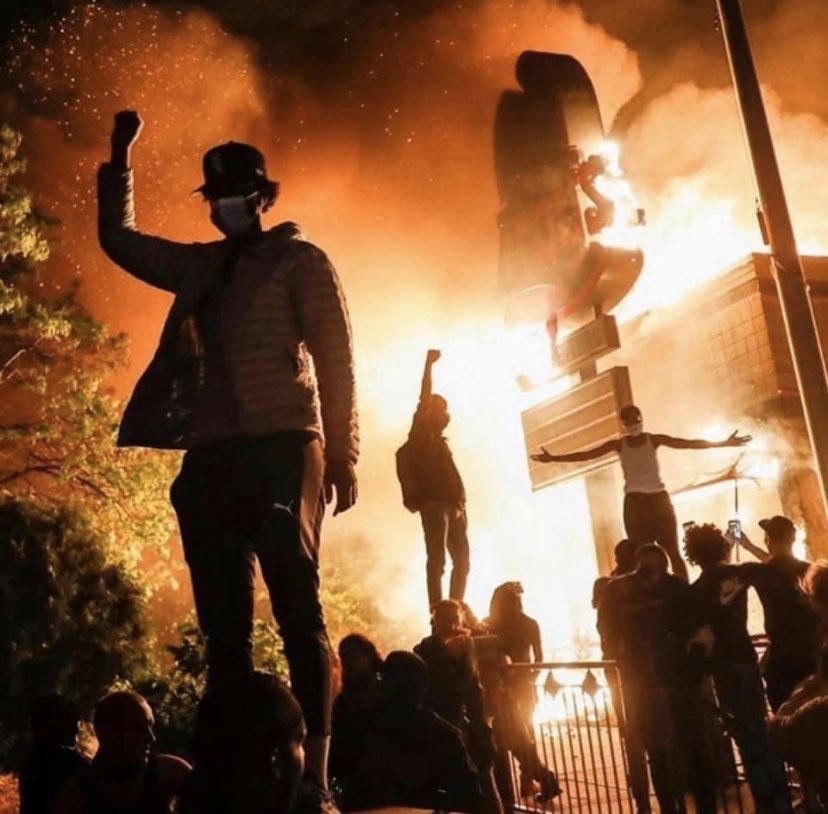 It’s been a long time since I’ve gotten political on here, but after last night, watching cities across America descend into chaos, I feel I have to say something. There’s so much pain being felt in this country by the African American community, so much despair among those who have lost their jobs in the past few month, and so much anger, that it’s hard to see how we come out of this intact.

Missus and I stayed up late last night, scrolling through our phones, watching cops and protesters confront each other. There was a man who got beat up by a crowd of people and had his car overturned and torched after he shot an arrow into a crowd of people. He lived. There was a shopkeeper who got kicked unconscious by a mob after trying to defend his shop with a sword. I don’t think he lived. NYPD using their vehicles to ram people blocking the streets. Police stations going up in flames across the country. People I know getting tear gassed and pepper sprayed by riot police. And you have a literal dumpster fire burning outside the white house.

It seems a lifetime ago that I was watching protesters in Hong Kong scuffle with police and wondering what it was going to take to get Americans out. Well, now we have our answer. One more black man, murdered by indifferent police officers, and captured on camera. This, on top of weeks of coronavirus lockdown, millions of jobs lost, and decades of lost opportunity, a generation without a purpose. And on top of all this, the President, fanning the flames on Twitter, speaking the language of white supremacy.

At this point I fear that we are headed to either full revolution, or dictatorship. Either would mean civil war, and I don’t see how we escape from that in the next five months before the election. I don’t think Trump wants us to escape from that. This administration has thrived on chaos from day one, and it’s the only way that he maintains his hold on power. He’s been telegraphing support for white nationalists with his words, and demonstrating with his actions that there will be no consequences for military and police who execute it.

Of course the riots and other violent protests have brought out the usual tropes about black people burning down their own neighborhood, and the response of riots being the language of the oppressed and unheard. The one that’s been on my mind lately has been the one from Kennedy: “Those who make peaceful change impossible make violent revolution inevitable.” The thing that bothers me the most in these times is that it is so easy for a right-wing instigator to don a black mask and attack someone so that it gets blamed on Antifa or the protesters. I’m hearing chatter about this now, about far-right ‘Boogaboos’, who want to goad America into a race war. Well, mission accomplished. I just wonder what difference it’s going to make to the average citizen.

And making everything even more bizarre is success of Space X’s first manned launch into orbit. It’s the first time since the space shuttle program ended that a manned launch has taken off from American soil. A running joke that I saw on Twitter in various forms was congratulating the astronauts for deciding to leave Earth on this particular day.

I’m a bit numb to all of it right now, this morning. I haven’t looked at my phone since I woke up, and I’m not sure I can go on there right now without getting lost. I’m waiting for a leader that can bring America together, but I don’t think there is one. Trump is only speaking to one segment of the population, his base. And no one really wants to hear anything Joe Biden has to say. Part of me keeps thinking about Bernie, whether we’d be here if he was president or even the nominee right now. It’s useless imagining. And there’s nothing for me to do about it.

I’d managed to stay detached from what’s been going on. I still haven’t watched the video of George Floyd calling for his momma while four cops pin him to the ground, and I don’t think I ever will. But last night, I sat and watched this video of Killer Mike speaking at a news conference in Atlanta, and it brought home how real things are getting out there. I’m hoping that someone like Reverend Barber can help pull us together, cause it definitely isn’t coming from the White House, and I doubt it’s going to come from the Democratic establishment. For now, there’s nothing for my wife and I to do but to stay home and take care of our family and act like nothing outside our door has changed.

Elder has caught me scrolling on my phone the past few days and has caught a glimpse of the images of unrest. I turned off my phone after she an image of George Floyd with a knee on his neck, and she asked me what was going on. “The police murdered a man because he is black,” I told her straight up. I’d decided some time ago not to lie or try to sugar coat things. If I want to raise an adult I’d better start treating her like one.

“They can’t do that,” she said, getting ready to repeat back something she learned in one of her history or civil rights-themed children’s’ books, “black people are equal under the law.”

Bless that kid, I thought. “Yes they are honey, and that’s why people are so mad.”