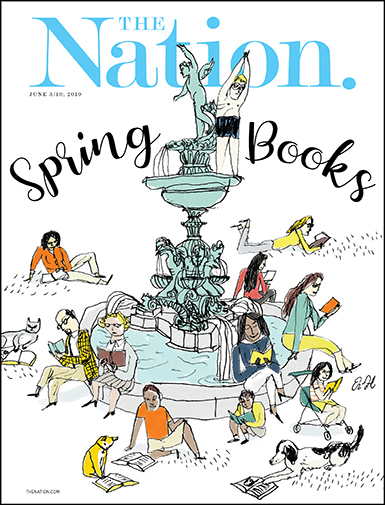 I’ve had a subscription to The Nation for just over a year now. Tom Nichol’s book with Robert McChesney, People Get Ready, was my gateway drug. I was a bit underprepared for the sheer amount of material that they publish, since the articles and reviews are rather lengthy. They have a really weird publishing schedule as well. The schedule is irregularly regular, certain months are four, three, or two issues. I’m sure there’s an story as to why it’s like that, but it’s just strange.

And don’t get me started on the crossword puzzles. Just reading the notes makes me anxious. I’m sure I’ll never…

Each issue has at least two hours of content if one reads cover-to-cover. Obviously, keeping up with the publishing schedule, and my other subscriptions, causes me to get pretty backlogged, and I usually have four or five issues in my to-read stack. I just finished the June 3rd issue, so that’s probably closer to seven. I’ve started to skip through most of the beginning features, the opinion and more recent event stuff, since by the time I get to the issue it’s already several cycles behind. I do read the features, and probably enjoy the book and media reviews in the back the most, since they’re usually more outside of the pressing issues and offer more of a historical context to things and people that I’ve never heard of before.

In spring and fall they put out their bi-annual books issues, which forgo the features in favor of more reviews. This is where I’ve just finished. I find that these reviews, both in these books issues and the regular editions, offer me a pretty thorough synopsis of not only a book or three about a subject or by the same author, but also about the history or background of the subject. I enjoy the exposure.

Everything to Lose: review of David Wallace-Wells The Uninhabitable Earth and Nathaniel Rich’s Losing Earth. Wells was recently on the Team Human podcast, which is also worth checking out. Since we now live in an age where climate disaster is all but certain, the question becomes what do we do now with our daily lives to adjust to it. I for one, after trying to work within the political process and Democratic party for the past 4 years, have become skeptical that our existing political system can dig us out of this mess. More radical measures will be needed, but we’re not likely to have the organizing power to affect this change until more of the effects are being felt, and more of the old guard has passed on to make way for younger generations. By that time, the amount of climate change that has been baked into the system in addition to what we’re already facing may be more than we can deal with. We’ll see what the next decade holds.

Box of Wonders: review of Jenny Odell’s How to Do Nothing. Ever since I deleted Facebook off of my iPhone months ago I’ve become to realize how toxic much of the online lifestyle has become to the human spirit. I’ve managed to stay away from it completely for some time now — don’t touch my Twitter, though! — and it’s been apparent how addictive these social media platforms are, and the damaging influence they have on society. My meditation practice is a way to cope with this, and in response I make it a priority to be present around my children whenever possible, or when I’m out with others. One thing I’ve rediscovered during this practice is the joy of doing nothing, and the tendency for the human mind to find something to focus attention on, whether it’s discomfort of the body in the present, regrets of the past, or anxieties about the future. Just being content in the moment is a really important skill and one that I am trying to teach to my kids. It’s also helping me break that habit of reaching for my phone during every period of waiting or those transition moments between activities during the day. The algorithms haven’t won yet.

The Language of the Unheard: review of Sylvie Laurent’s King and the Other America. As someone who has been very interested in the work that Rev. D. William Barber II has been doing with the revived Poor People’s Campaign, histories of Martin Luther King’s original Poor People’s Campaign always gets my attention. I’ve written about King’s radicalism elsewhere, and how he’s been sanitized and co-opted by everything from corporations to the conservative right. His tendencies toward social-democratic politics are well documented. Some might even say he held socialist views toward the end of his life. Who knows where we might be today had he and Robert Kennedy been able to keep this movement from failing?