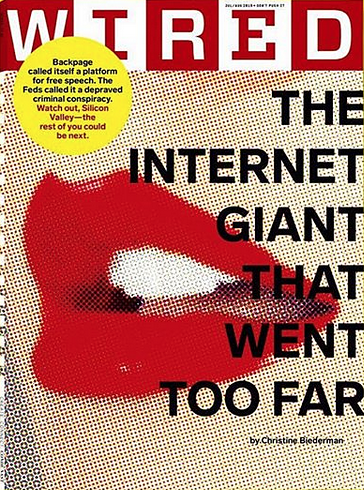 Wired Magazine was one of the most influential magazines I read growing up. I credit it with giving me a leg up on where tech was headed, and how it was going to transform the world. It’s only been recently that I’ve understood that they were not so much predicting the future as they were reporting the present and building the future. I’ve loved sharing Wired with friends to help give them a peek into this world. My subscription may have lapsed for a few years earlier this decade, but I still love this magazine. I don’t look to it so much as a beacon of the future, as I do for their long form stories about what’s going on.

The one thing I dislike the most? Their gadget features, which is usually a bunch of overpriced shit for people with too much time, and too much money on their hands. But I guess that’s expected, given the ads that usually accompany the magazine, likely focused at the Valley founder / venture tech-bro set.

Mission Out of Control, by Stephen Witt: Just in time for the 50th Anniversary of the Apollo moon landing is this account of just how close to disaster it came. We all know that we carry more processing power in our phones than was available in the Apollo capsule, but it still boggles the mind how they pulled things off back then. Weaving machine logic on a loom and wrapping it into a bundle of wires? Amazing. The solutions that they came up with to design these systems were quite ingenious. But apparently they could solve for everything. Armstrong wanted the return radar antenna left on in case they needed to abort the landing, unfortunately, this used up too much of the console’s limited memory, and caused the guidance system to crash the system. Armstrong had to guide the lander in manually and — spoiler — he landed successfully. Allegedly.

Besides two features about the reemergence of measles thanks to anti-vaxxers, and another about the unique VR-assisted directing used by Jon Favreau in Disney’s new Lion King reboot, there are two that are complementary and focus on sex and crime: The Fight to Take Down Backpage, by Christine Biederman, and How a Hacker Shamed Teen Girls — And How They Fought Back, by Stephanie Clifford.

Backpage.com was once the internet’s classified site for sex. Founded by a pair of hard-assed, first amendment loving, sons of bitches, it quickly drew ire from the authorities due to their no-fucks-to-give attitude toward doing what they want and willingness to fight back against attacks. After several years of facing off against the owners, they eventually used civil forfeiture tactics to seize their assets, and have been using stalling a delaying tactics to draw out the legal challenge to hopefully beat the defendants in a war of attrition. The case is troubling for both free speech and sex work advocates, and this case covers a lot of history about the safe-haven clause of the Communications Decency Act, Section 230, as well as the SESTA/FOSTA. The latter, intended to fight sex trafficking has, according to opponents, conflated trafficking and consensual sex work, and has driven exploitation and traffickers into the darker corners of the internet.

Clifford’s story, about a group of girls in rural New Hampshire who were cyberstalked and harassed by a classmate, documents the abuse that the girls suffered, and the case that law enforcement built against the perpetrator. It documents the way in which their perpetrator built up trust, talked them into taking risque pics, and then tried to exploit them for more explicit images. When the girls refused, he hacked their accounts and released their images under fake social media profiles, which caused these young women no end of stress and social trauma. Many of them were ostracized by their peers and punished by their families. Perhaps dozens of girls were caught up by this perp, who was only a teen himself, but there were perhaps many more who never told anyone about the abuse and have perhaps been suffering alone.

I say these last two stories are complementary, cause they seem to be touching on two sides of technology and sex. In the Backpage piece, we have two rich old white guys who are battling the feds to be able to sell sex on the internet, while trying to maintain an air of plausible deniability. In this piece, there is literally nothing about the individuals on the other side of the transaction. There are mentions about some of the underage victims who were exploited and abused via posts in Backpage, but we hear nothing from them themselves. The second piece is the opposite, we hear nothing from the perpetrator in this case, but hear from several of the victims that were abused, and the fear and PTSD that they still suffer to this day.

It’s an interesting editorial decision from Wired. I imagine that they felt they were coming off as too sympathetic to the Backpage owners and wanted to counterbalance accusations by including the sexting piece. I think both are important, and have a bit of a nuanced position on the two. I do think the feds have probably overstepped their bounds on the Backpage case — we’ll see how it plays out, and I’ll be sure to pay attention to whether SESTA/FOSTA is challenged at the Supreme Court. On the other hand, I worry about the world that my daughters are growing up in and will make sure to take steps to make sure they understand the dangers of cyberstalking and sexting. One problem that I think with the way the second case was handled was that when authorities became aware of who the perpetrator was, a sixteen year old boy, their response was not to confront him or involve his parents, but was to spend another two years building a case against him so that they could throw him in prison for eight years. Not to question the decision of the authorities in this case, but it seems like there is more to the story that is missing there.

gm. Spent a lot of time to realize how ephemeral Solana is. Ex: the Serum event queue is a circle buffer, meaning that once it's overwritten, trades data is gone from the program entirely. Compare this to EVM event emissions.

Explaining to my mom -- who worked a gov't job till she was 65 -- how her 40-yo son quit his job and now manages 100s of thousands of dollars in **checks notes** video game spaceship NFTs. pic.twitter.com/PCL2TNDhcj

The last two weeks have been utterly exhausting but I am so happy to be able to hit send on this. twitter.com/saiadao/status…

gm. TIL that including a bundled dependency in package.json with a file: designator does not redirect to the file location during build time. Yarn copies it to node_modules and uses that to build. Which is why I went insane yesterday.