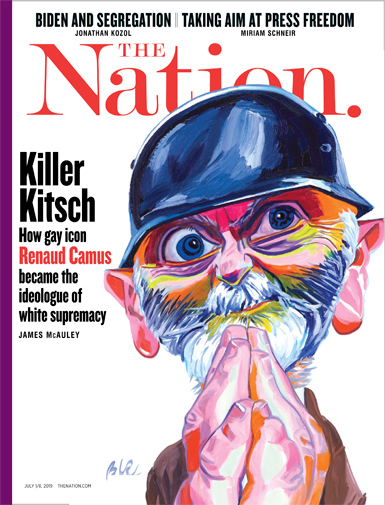 Killer Kitch, by James McAuley: I’ll admit I didn’t read all of this issue’s cover story on Renaud Camus. I’m not familiar with his work, but after a couple of pages about this man I had read enough. I guess I’ve heard enough about le grand replacement, and given that I had been reading this around the second anniversary of Unite The Right’s Charlottesville rally, I don’t think I really wanted to read more about it.

The Florida GOP’s Assault on Democracy, by Sasha Abramsky: This seems par the course these days: citizens overwhelmingly approve ballot measure that will increase voting power by demographics likely to favor Democratic party candidates; Republican legislators move the goalposts and otherwise try to undermine the voice of the people in order to preserve their power. In this case it was a measure to reinstate voting rights for persons convicted of a felony after they had served their time. We’ve seen a similar response play out here in Virginia after gubernatorial executive orders granting blanket restorations to tens of thousands of citizens. The Virginia GOP about had the vapors.

The situation is a bit more dire for Republicans in Florida, given the state’s role in the 2000 presidential race. According to Abramsky, about 1.4 million people were expected to be reinstated by Florida’s Amendment 4, but state Republicans have managed to lower that number to around 800,000 changing the criteria and qualifications that individuals have to have to fall under the rule. And since it seems to be par the course for these reviews, here’s the obligatory Last Week Tonight segment that covered the absolute shitshow that was Florida disenfranchisement before the 2018 vote.

The Statue Aimed at Julian Assange, by Miriam Schnier: Now I could normally give a rat’s ass about Assange. I dislike him for a variety of reasons, but as I’ve said here before, how we treat the worst of us reflects on us. And the real importance about this article is because of the information it gives about the 1917 Espionage Act. And this is really where my subscription to The Nation really pays for itself. The magazine has been around long enough that it was there a hundred years ago, when noted the passage of the act with the headline “Civil Liberty Dead”.

“Based on language in the act that criminalized efforts to obstruct military recruitment, the government rounded up thousands of anti-war protesters, union activists, and political radicals, many of whom were held without trial in hastily organized internment camps.

Socialist Party leader Eugene Debs, and anarchist activist Emma Goldman were both imprisoned under the Act, and Daniel Ellsburg likely would have been convicted for his release of the Pentagon Papers of not for the incompetence of Nixon’s ‘plumbers’. Both Chelsea Manning and Reality Winner have been charged under the Act.

While I’ll not defend Ethel and Julius Rosenburg’s spying for the Soviet Union, Schnier notes “the government has been able to use it to restrict freedom of speech; imprison anti-war activists, socialists, anarchists, communists, and ideological whistle-blowers; and help to destroy numerous progressive organizations and publications.”

Lost Bearings, by David A. Bell: Review of A Thousand Small Sanities by Adam Gopnik. Ah, liberalism. A word that has been demonized both by the right and the left. I’ve given much thought to its meaning, mostly in relation to the term progressive. My theory is that the two differ mainly on economic issues. Over the years, there’s been so much demonization of ‘liberal’ by right wing media like Limbaugh and Fox News, that actual liberals have fled from it, preferring the term ‘progressive’ when describing themselves. As far as social issues like race and LGBT equality goes, there isn’t much air between the two sides, and liberal politicians have been using the term to signal to the Democratic base that they are on board with these issues.

But my qualm with these politicians is that they share none of the economic values that are inherent in progressivism: welfare, economic equality, regulation, and progressive taxation. Virginia’s current Governor, Ralph Northam, is probably the most egregious example that I can think of, who was running around the state during his 2017 campaign, calling himself a progressive while simultaneously taking tens of thousands of dollars from fossil fuel companies.

I’ve long referenced the three party system in explaining these differences during my political activities. The ability of the liberal corporate wing of the Democratic party to play lip service to the progressive wing of the party continues to sicken me. Unfortunately, so long as the party of Trump continues to be dumpster fire, moderate, right leaning citizens who would normally vote social and fiscal conservative, will migrate to these moderate Democrats. Given the current demographics of the electorate, and the paltry participation by more progressive-leaning Millennials, I can see no solution to this problem until the current generation of boomers ages out of the population.